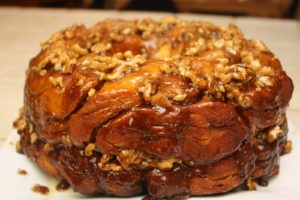 An indulgent dessert or tea-time treat made from store-bought frozen bread roll dough flavored with caramel and cinnamon. Chopped pecans add crunch. This bread is quick and very easy to prepare and practically fool proof. The secret is in the creamy caramel sauce. Here is an easy dessert recipe for Praline Pull-Apart Bread.

Spray a 10-inch tube pan with cooking spray, set aside.

Mix 3 tbsp cinnamon and sugar in a shallow bowl. Separate the frozen dough balls and roll each one on melted butter, then into the sugar-cinnamon mixture.

Arrange the dough balls in prepared pan. Sprinkle with pecans. Repeat procedure until all the dough is used up sprinkling pecans in every layer. Add remaining sugar-cinnamon and butter mixture over the dough. Cover with plastic wrap and chill overnight.

Preheat oven to 325° and take out the dough from the refrigerator. Beat whipping cream at high speed with an electric mixer until soft peaks form. Add in brown sugar and remaining 1 tsp. cinnamon. Pour cream mixture over dough. Place pan on an aluminum foil-lined baking sheet to prevent messing up the oven in case the pan spill over during baking.

Bake at 325° for 1 hour or until golden brown. Cool on a wire rack for at least 10 minutes before inverting onto a serving plate. Drizzle any remaining sauce from the pan.