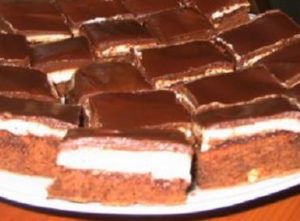 Decadently delicious treats made of three layers: a super moist brownie base, creamy cinnamon-flavored filling and gooey chocolate-espresso glaze. It is a little complicated to make because of the many components but every morsel is worth the extra effort! Here is a delicious, albeit not so easy, dessert recipe for Cappuccino Brownies.

Procedures:
Preheat oven to 350°F. Line an 8-inch square baking pan with parchment, leaving some of the parchment hanging up the sides. Then, lightly grease parchment with cooking spray.

Start with the brownie layer by melting chocolate and butter with espresso mixture in a large saucepan over low heat. Stirring constantly until smooth. Remove pan from heat and cool mixture to lukewarm before whisking in sugar and vanilla. Add eggs, beating well until mixture is glossy and smooth. Stir in flour and salt until just combined. Fold in walnuts (if using). Pour batter in pan, spreading evenly with a spatula. Bake in the middle rack of oven until a tester comes out with crumbs adhering to it (about 22 to 25 minutes). Leave brownie in pan and cool completely.

While waiting for the brownie to bake, make the cinnamon-cream cheese layer by beating cream cheese and butter until light and fluffy in a bowl using an electric mixer. Add powdered sugar, vanilla and cinnamon and beat until combined well. Spread frosting evenly over cooled brownie layer. Chill brownies 1 hour, or until frosting is set.

For the glaze, place chocolate, butter, cream and espresso mixture in a heat-proof bowl and heat in the microwave for 30 second intervals, stirring, until melted and smooth. Let cool a little bit to right consistency before pouring over cream cheese layer. Cover pan with kitchen wrap and chill in the refrigerator until completely set (at least 3 hours).

To serve, simply lift the brownies out of the pan by holding the sides of the parchment. Place on a cutting board and gently peel off the parchment. With a long, thin knife, cut chilled brownies into 24 squares. Serve brownies cold or at room temperature. These Cappuccino Brownies will keep, covered and chilled, in one layer, for 5 days.