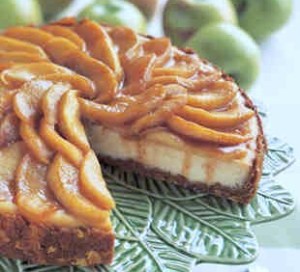 Cream 1/2 cup butter and sugar in small bowl until fluffy. Add flour, oats, nuts and cinnamon; mix well. Press mixture firmly on bottom and halfway up side of 9-inch springform pan. Bake for 10 minutes; set aside.

Bake cheesecake for 45 minutes or until center springs back when lightly touched. Cool.