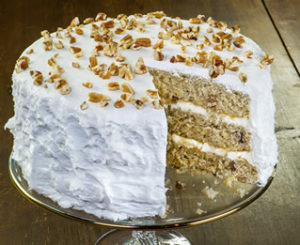 Hummingbird Cake is a classic southern cake made with bananas, pineapple, chopped pecans, and topped with a cream cheese frosting. It is a well loved dessert in the Southern United States since the mid 19th century. It was named after the minute feathered creatures because they would probably feast on this deliciously sweet cake if somebody insane left it out unattended! Here is an incredibly delicious and unbelievably easy to make recipe for Hummingbird Cake.

In another bowl, whisk the canola oil and eggs together until combined. Stir the pineapple, bananas, vanilla and one cup of the chopped pecans into the egg mixture and mix (do not beat).

Using a wooden spoon or spatula, fold the moist ingredients into the dry ingredients until just combined (do not over-mix).

Pour the batter into the three prepared cake pans, taking care to divide evenly.  Bake on center racks of oven for 25-30 minutes or until a toothpick or knife inserted in the center comes out clean.

To make the frosting, cream the softened butter and cream cheese in a large bowl with an electric mixer. With the mixer on a slow speed, add the confectioners’ sugar in small amounts until all is incorporated, then add the Cointreau (or liquor of your choice) and vanilla. Beat until the frosting is light and fluffy.

Place one layer, top down, on a platter or cake stand. Spread frosting evenly over the first layer, then repeat with the second and third layers. Use remaining frosting to cover the sides and top of the cake.

Sprinkle the top completely with the cup of chopped pecans. Store in refrigerator, then remove one hour before serving to allow the cake to come to room temperature.